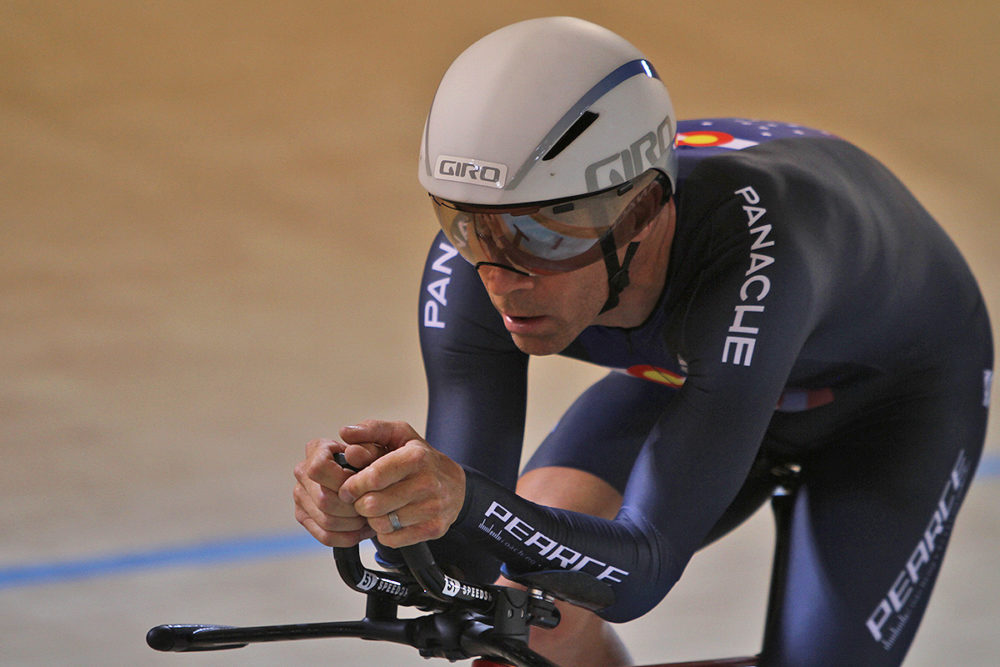 THE HOUR. Those two words represent many things to many people. Some believe it to be the ultimate test of man and machine: out there on the track, with nowhere to hide, an athlete must come to terms with what he or she is truly capable of. Others know it as a form of torture, a crucible for understanding one’s ability to cope with pain, suffering, or madness. If you’re lucky, the Hour is a hard way to reach a form of cycling-inspired, dizzying nirvana.

Many of the greatest cyclists in history have made attempts or held the Hour record. Most of them then crawled off their bikes never to ride on a track again. With UCI rule changes several years ago came a resurgence in interest in the event. Eventually, Bradley Wiggins smashed the record, hitting 54.526 kilometers in June 2015.

And the obsession lives on. There are few people in the world who know both the agony and ecstasy of the Hour as well as Colby Pearce, our main guest today and someone who has attempted more Hour records than almost anyone else, save for maybe the great Graeme Obree. Last week, Pearce set a new master’s world record in the 45-49 age category, riding a remarkable 50.245 kilometers, 833 meters farther than the previous record held by Kent Bostick.

In this episode, we sat down with Pearce to dive deep into the Hour. It’s something Case knows all too well, since he too made an attempt in 2015.

In addition to their personal experiences, in this episode, you’ll hear a discussion of:

It then jumps into a discussion on how to prepare for the Hour:

Then, gear and aerodynamics, from frontal area to the finest of gains to be had from chain friction to sock length. Finally, we break it down. Ultimately, it all comes down to executing on the track:

Pearce’s wealth of knowledge on the Hour is unsurpassed, and we’ll hear a lot from him in this episode. We’re also lucky enough to hear from two other Hour veterans. When Case was preparing for his Hour attempt in 2015, he had the pleasure of chatting with Rohan Dennis, who briefly held the Hour record that year. (As an aside, just days ago Dennis won the world time trial championship in Innsbruck.) Back in 2015, Case also spoke with Dennis’s coach, Neal Henderson. Both of them have interesting thoughts on the Hour.

So, zip up the excruciatingly tight skinsuit. Check to make sure your power meter is on. Pull the aero socks high. It’s Hour Record week at Fast Talk. Let’s make you fast.